An entrepreneur, philanthropist and social worker.

Background
This is a story that takes place everyday in the streets of Kathmandu. The first time we met Shubha Raj Tamang was in July of 2012. It was like every other day for Sandeep Khanal, our current vice-president. He was busy with his work and that’s when Gyani Maya Tamang, mother of Shubha Raj and a local tea seller delivering tea to businesses nearby, brought in a nice cup of tea for him. She put a glass of tea on his desk and after looking at what he was doing on his laptop hesitantly asked – “Is this what I think it is? It is a computer right? How much does this cost? My son always argues with me to buy one.” This is where it all started.

Sandeep told this story to us, the team members of Techno Cottage Nepal, and we were equally eager. Therefore, on July 15 of 2012, we gathered up at his office and decided to take an informal interview of him.

Shubha Raj Tamang currently studies at Shree Mahankal Secondary School (SMSS) at Mahabauddha, Kathmandu. He is in grade 8 and is a brilliant student. He falls in second position most of the time when it comes to exams. He told us that he currently lives with his mother and his father at a nearby house. He is now 15 years old and his aim in the future is to be an Engineer. His mother works at a local tea shop nearby and that’s the only source of income for their family. Their permanent home is in Anikot VDC, Kavre. When we asked about his father he hesitated and unwillingly confirmed that he too works at the tea shop. But, we found out that his father was a drunkard who boasts about being a leader of thelgada (local wheelbarrow) drivers. His name is Mr. Buddha Sharan Tamang. We heard stories about him – how he tears books and assignments of his son when he is drunk, why they were forced to shift house so many times and how he came first in his class when his father was not with him (when his father was in his village, Kavre).

Shree Mahankal Secondary School, where Shubha Raj studies, has about 20 computers and that the subject is taught to students from class 4 onwards. In grade 8, there are currently 14 students with 7 girls and 7 boys. Shubha has been studying in this school since nursery and has been to Kathmandu from 5 years of age.

Sandeep asked him to write an essay (in Nepali) about computers. The title was – ‘How do you feel when you don’t have a computer at home? What might be the benefits of owning a computer? And, what will you do after you own a computer?’ We also asked him to bring his progress report. We wanted to see how good he actually was and he got a day to finish all this.

On July 18th we got his reply and his answer was simple. 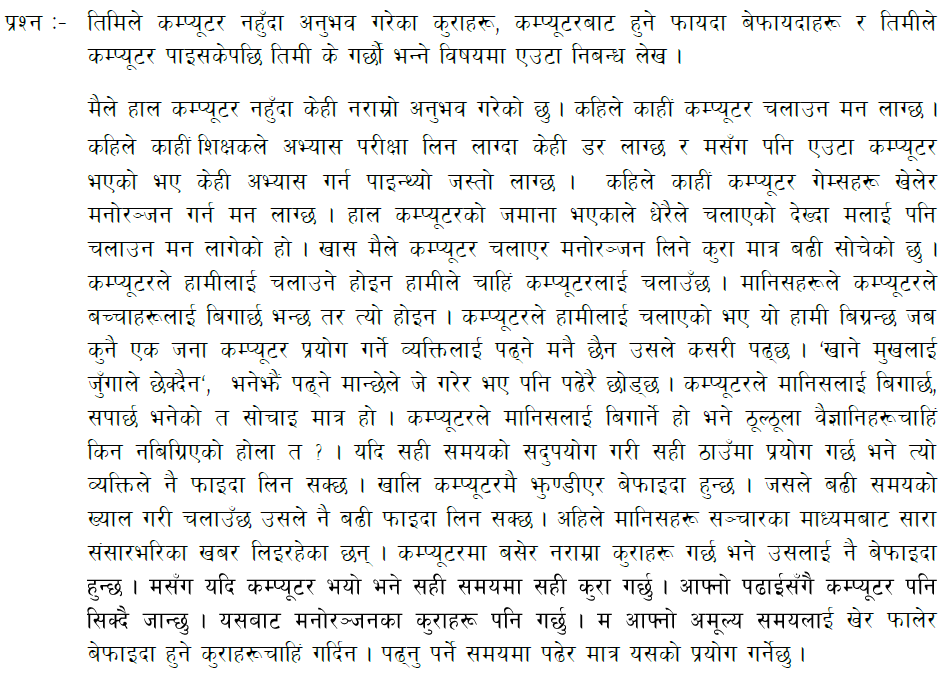 I feel bad when I don’t have a computer. I want to use a computer once in a while. Sometimes I feel afraid in classroom when my teacher asks me questions about computer. At that time I wish that I had a computer so that I could exercise or learn before appearing in class. Sometimes I think about playing computer games to entertain myself. Today is the age of computers and I feel like using it when I see other people using. I have thought more to entertain myself than doing any other things for now. Computers don’t use us but we use computers. People say computers hamper/damage people but that is not true. If a person doesn’t have a will to study, they don’t study no matter what. It doesn’t have to just be computers. Computers don’t do good is just a thought people have here. If this was the case, why are Scientists not bad people? If people start using computers in a right way in a right time then they have a lot of benefits. Spending a lot of time using a computer also doesn’t do good. People who use it keeping in mind the time they spend on it, benefit the most. Today, people use technology to get in touch of latest news from around the world. If I have a computer, I will use it in a right time and in a right way. If I have a computer, I will learn about it more along with my studies. I will also entertain myself once in a while. I will not do anything that will waste my precious time. I will use it only whenever I need it. 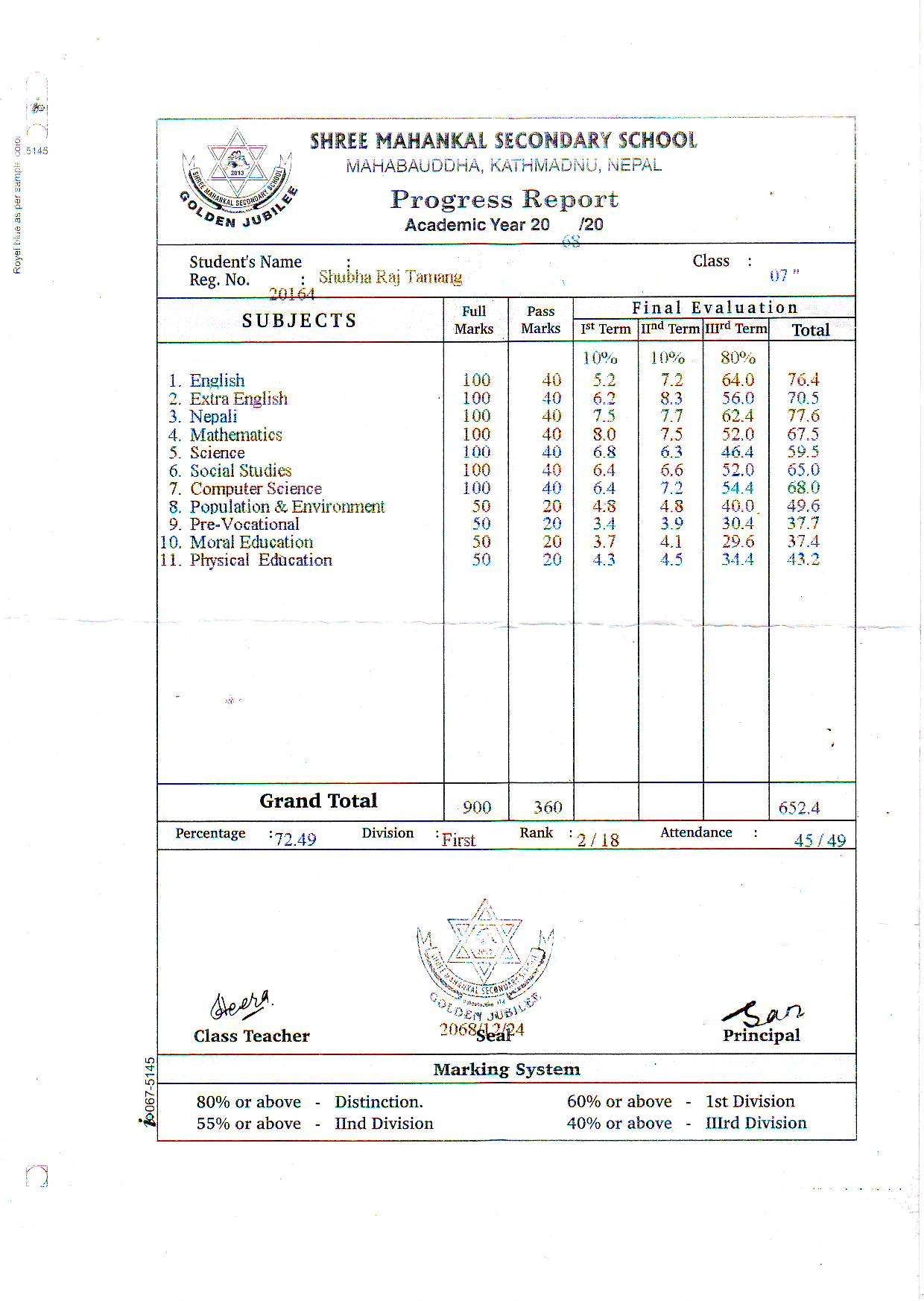 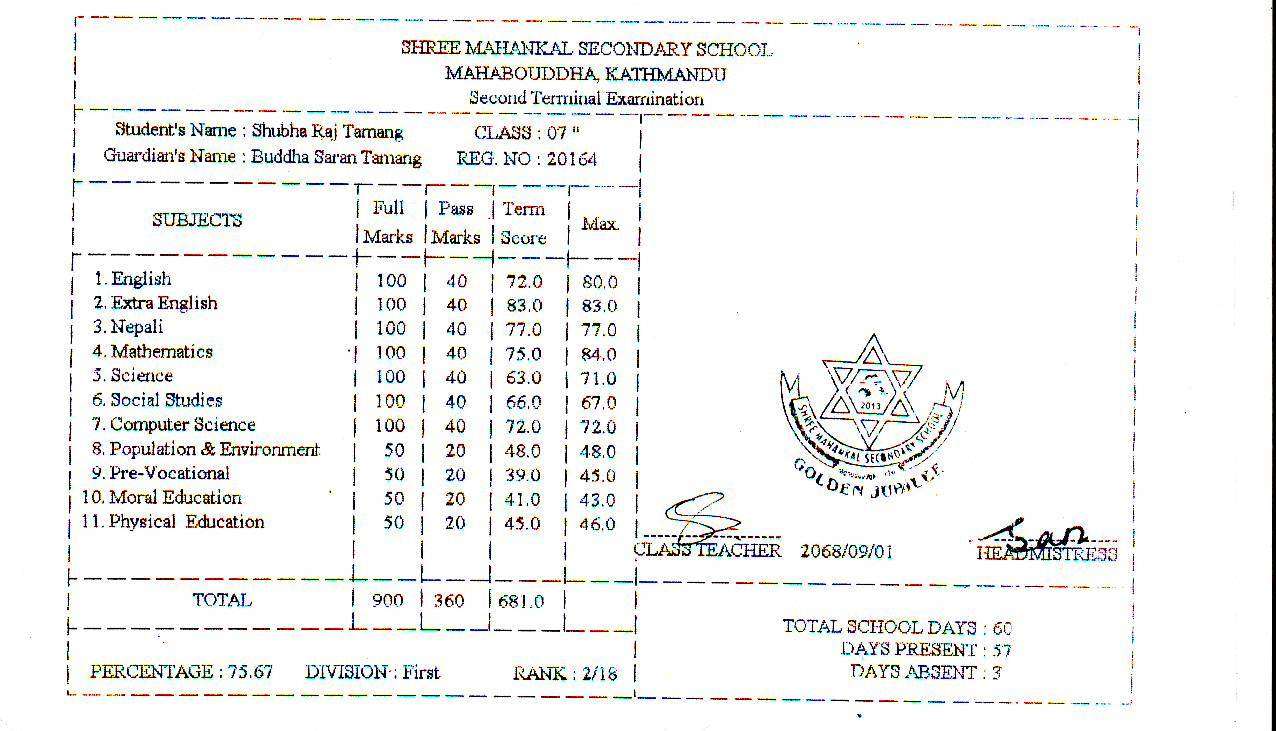 It was clear to us that Shubha Raj has some potential and we thought that we should help him. Immediately, we agreed to donate a desktop. We decided to visit his house to figure how/where to setup a desktop.

On July 18th, Sandeep and I went to see his house. We were really touched by the scene. When we reached there we saw her small shop just by the door of this old house on the street. We were surprised to see how she managed to keep alive her profession. There was a ladder behind the shop which was the passage to their room on top. We had to squeeze ourselves in, in order to reach their living room. There was merely any room for a desktop. All that could fit was a bed, a cupboard and an old TV set, that’s it. We could not imagine a desktop in that room so we decided to donate a laptop.

We later found out that his home was destroyed in the earthquake of 2015. He was trapped in his home and with the help of other was successfully freed. This gave us even more motivation to help him. We hope we will be able to continue that journey in the future.

My take on this:
Sometimes I think maybe there are lots of students like Shubha who are good but are struggling each day to become an engineer or a doctor or a lawyer or an artist or something they want to become. But, why should I care, why should we care? Before we ask that question, we should always remember that a count to million always starts with a number 1. That’s what we are doing, helping 1 student who will help 100 others.

An entrepreneur, philanthropist and social worker.

Spread the news,
Express your thoughts on the news

Visit our HOMEPAGE and enjoy reading


Have you filled in your Autograph at suvadin?

Write your own News